ECADR has rescued dogs in just about every physical condition you can think of. A special needs dog is a dog that has an ongoing medical condition that may need continuous care. These dogs would normally be euthanized in a kill shelter. We believe that there is love to get and give even with a special needs dog. Our volunteers take them into their homes and provide love and care.

We have no special needs dogs available right now.

THE STORY OF FREDDY

Freddy, a little Shih Tzu was brought into a local emergency animal hospital where I work by an animal control officer. This little dog was so matted that his back legs were actually stuck together. He could not use his back legs, and drug himself across the floor. The most amazing thing about that is that one of his front legs was totally useless. This little 8 pound dog was dragging himself around with only one leg! 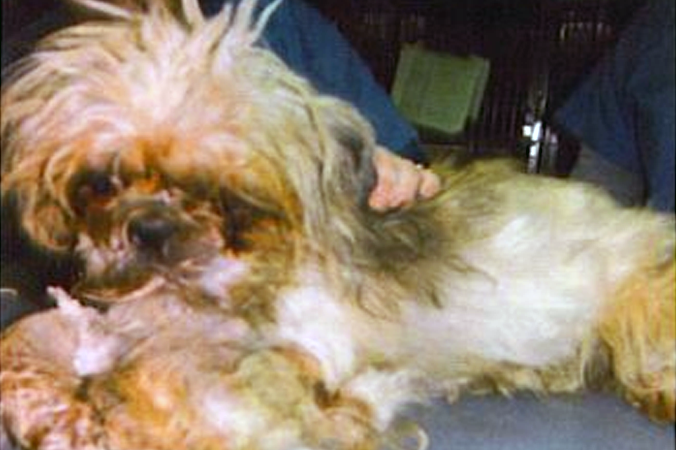 Poor little Freddy is only about 2-4 years old! It is hard to believe a dog could become this matted and this damaged in such a short time. We can only imagine that Freddy was never groomed. A dog with hair like his, that is long and continues to grow, needs to be groomed! A trip to the groomer’s every 6 weeks or so, or the investment in some clippers, would have been all that was needed to save Freddy's legs! Even brushing him once a week would have helped! Thanks to some very generous people, Freddy got the surgery he needed. East Coast Asian Dog Rescue, Inc. paid for his surgery, and Warwick Animal Hospital in Warwick Rhode Island agreed to do the surgery and hospitalization at less than half cost! Little Freddy even stayed an extra day at the hospital after his surgery to make sure his pain was under control at no extra cost. Thanks to the folks at East Coast Asian Dog Rescue and to Dr. Kevin Weed and the staff at Warwick Animal Hospital, Freddy's life was saved!

Because his former owners did not even take the time to brush this little dog, he has lost a leg, and may have permanent damage to two more of his legs. The price of a hair brush and a few minutes a week! Isn't a little sweet dog like Freddy worth even that much? Through it all Freddy has been a great little guy

Giving kisses and wanting to be held and loved, this little man forgives what was done to him. He is feeling better and better every day, and is even now trying to run and play a little with the other dogs. Freddy will never suffer from the lack of care again.

Thanks to his foster parents in PA and the donations that paid for Freddy's vetting, Freddy was adopted and lived happily ever after in his forever home!

This picture was taken after the vets had worked on shaving him down for about 1/2 an hour. It took a total of 2 hours to get most of the mats off. They weren’t able to remove the mat on his front leg because it was the only thing holding his gangrened leg onto his body.

East Coast Asian Dog Rescue's mission is to rescue Pekingese, Shih Tzus, Pugs, and other “toy” breeds from abuse, abandonment, or death and kill shelters throughout the Eastern United States.

Stay up-to-date and get our latest news by email.

Questions? Please email us at  info@asian-dog-rescue.org